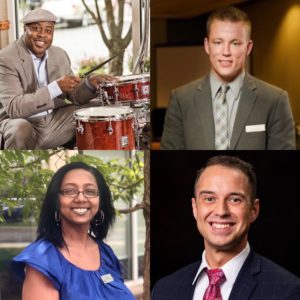 We’re very excited to announce a few promotions that have been in the works here at Musselman Hotels.

Originally from Munich, Germany, Gary is a 20+ year veteran of the hospitality industry. Since 2007, he held multiple roles at the Hilton Garden Inn Louisville Airport, a Musselman Hotels property. Gary enjoys listening to all types of music, especially rock. He also loves playing music and is the best basement drummer you’ve never heard of.

Clay’s entire career has been in the hospitality industry, starting at the ripe age of 14 as a dishwasher at a local Tumbleweed. His positive attitude has brightened our days here at Musselman Hotels since 2012 when he helped us open the Marriott East. Clay was most recently the AGM at the Embassy Suites Louisville East.

Latonya has been with Musselman Hotels for the last 20 years and has a diverse background in sales, operations, and revenue management ranging from select to full-service hotels. She was most recently the AGM at the Hilton Garden Inn Louisville Northeast. In her spare time, she enjoys reading, spending time with her kids, and loves the University of Louisville basketball team!

Max began his hotel career in 2010, and joined Musselman Hotels in 2012, helping us open the Marriott Louisville East, in a variety of roles. He most recently was the Front Office Manager at The Seelbach Hilton Louisville. Max enjoys hitting the links and finding new ways to improve his golf game. He takes pride in his vast knowledge of Kentucky heritage and has a strong passion for Bourbon.

Way to go, team! We couldn’t be more thrilled to continue to watch you all excel. Cheers!